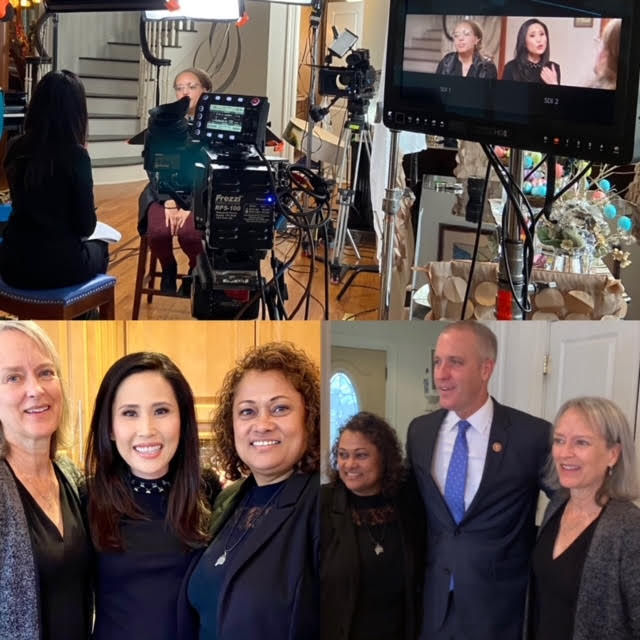 Early in 2020, NBC reporter Vicky Nguyen let us know she’d relocated from her Bay Area NBC affiliate to studio headquarters in Manhattan. For five years, Ros and I had had periodic conversations with her, though no news stories materialized. Now Vicki was a correspondent for the Today Show. “Maybe I can help you,” she said.

After preliminary conversations, we decided to meet at Ros’s upstate New York home, where filming would occur. Though Ros and I had been interviewed before, never like this—with a producer, cameraman, sound man, thousands of pounds of equipment, hours of set up, the recognizable face of a national news figure, and Congressman Sean Patrick Maloney, the original sponsor of our bills.

As Protect Students Abroad (PSA), Ros and I viewed Vicky’s interview as critical to the organization’s goal, mandated reporting of student safety incidents abroad. If we could connect the deaths of our sons, Thomas and Ravi, with other study abroad student deaths, we could explain PSA’s reasoning.

But much to our dismay, questions weren’t shared beforehand. We were meant to “sound unrehearsed” and have “natural facial expressions.” So, the night before, Ros and I barely slept. We were that nervous.

The next morning, NBC’s team arrived in succession. First came camera and sound, then food, the producer, Vicky, and Congressman Maloney. People fanned out over the entire main floor. For the congressman, a well-lit location was chosen, with winding stairs in the background, while Ros and I were seated in a cozy den, two chairs pushed side-by-side.

Vicky started her interview with us. Right away, questions were difficult, not intellectually as much as emotionally. Toward the end, she asked Ros, “Knowing what you know now, would you let your son go on this study abroad?”

“No!” Ros responded without hesitation, listing the program’s failures.

I thought to myself how this was so like my colleague. One of the first stories Ros had shared about herself was how Ravi referred to her as “the junkyard bulldog,” fiercely protective, quick to act, and 100% clear. How I wished Vicky would not ask me the same question.

But as Ros ended her critique, Vicky’s head slowly swung in my direction, eyes establishing contact, “And you?”

I felt a thousand possibilities scatter, like rocks down a jagged path. Contingencies diverged into what-ifs, even as Thomas’ death made every single one of them fiction. Nothing would bring him back.

“I don’t know,” abruptly I felt sure this was a test, and I’d failed.

“I mean, I would do anything to have Thomas back. But to tell him ‘you can’t choose—I’ll choose for you’?”

I paused, wishing to claim no. But too late, I’d already turned in another direction. Instead, I took a breath and continued, “Parents walk a line between giving children guidance and freedom. The missing piece is good information. Better facts would help everyone—including the schools.”

Did I imagine flitting confusion across Vicky’s face? Maybe I hadn’t stated PSA’s case succinctly? But the cameras were still going, so I attempted to illustrate.

“For example, on the day Thomas died, risk was piling up. Rain. Diminished light. Exhaustion. Absent supervision. All these things are linked to fall-injuries. They are the small risks that add up to catastrophic risk.”

I could feel my pace of words gain speed, “This is why PSA asks for data. How can we expect students to make good decisions when the programs themselves do not have good information?”

We were less than an hour into what would be a day-long endeavor. NBC’s goal was a few good minutes of tape, and I’d already covered the essence of PSA’s position. I should have felt satisfied. But I didn’t. Vicky’s question had assumed space inside of me and would live there for months.

Why didn’t I just say no?

Following a study abroad student death, program leaders and education experts may issue a public statement. Often, the event is referred to as an “accident” or a “tragic accident.” The media will then repeat this language until it is everywhere. Explanations arrive on the authority of education professionals, despite the typical lack of independent investigation.

Tragic, but an accident, becomes the public view of student travel deaths. Death occurs due to bad luck, unknowable mystery, or possibly, someone’s fault—though unless blame belongs to the victim, this, too, will likely remain a mystery. An accident is understood as a mishap, misfortune, or mischance, rather than a mistake requiring inquiry and correction. Sadly, devising death-prevention strategies is not feasible when comprehensive information about previous deaths doesn’t exist.

It is nearly impossible for parents of a suddenly deceased child to describe early efforts to integrate what has happened. The level of shock is so great that mothers and fathers could hardly explain what is taking place inside them, though assembling a coherent understanding of events is usually an early goal. After all, making sense of the senseless is essential to holding on to one’s existence.

Ultimately, however, bereaved mothers and fathers reintegrate and cope in different ways. Like Ros and me, some pursue advocacy. Some embark on a spiritual journey. Others focus on what remains of living—family, friends, work, and other interests. Some find a new community, whether through grief groups, religious or social organizations, or a cause connected to their child. Extroverts may become introverts. Thinkers may become feelers. Some may keep their child’s room the same. Others may relocate. Radical change often follows sudden child loss, though it may manifest inside only.

While no two children are alike, their deaths contain similarities

Much of our interview with Vicky ended up on the cutting room floor. What made it onto the Today Show was filmed later that morning. The producer placed us near windows high over the Hudson River. PSA’s binders of the dead had been spread across the kitchen table. We slowly paged past familiar faces, recalling news stories, knowing that other mothers and fathers are also grieving. We remembered how surprised we were when news reports of student demise began to seem like versions of one another. While no two children are alike, their deaths contain similarities.

Student travel safety defies straightforward explanations. When study abroad goes well, learners benefit from what has been marketed as a life-changing experience. They thrive in ways that wouldn’t have been possible without study abroad, even as they barely recognize how many operations have come together to create such experience.

It is only in tragedy’s aftermath that one sees the intricate relationships that inform opportunity and risk—multiple schools, multiple countries, multiple landscapes, multiple jurisdictions, not to mention multiple people, often unfamiliar. Risk factors, such as fluctuating weather, time of day, nutrition, hydration, fatigue, transportation, infectious disease, crime, and so on, add to student travels’ complicated nature. When chance accumulates, and a tipping point occurs, life-changing takes on an entirely different meaning.

Given the magnitude of devastation that ripples through grieving families and communities, Ros and I expected higher ed to join our call for evidence-based information. But Thomas and Ravi have been gone nearly a decade, and though PSA has made inroads with particular professionals, industry advocacy for transparency has not taken hold. If anything, news reports of student deaths and injuries are increasingly difficult to find.

The irony of Covid

Within a day, study abroad membership organizations issued a public response to the CDC. Their statement revealed frustration with the guidance. While these organizations claimed expertise, they stopped short of claiming authority. I read and heard bravado, but underneath, fear. Covid had the potential to eliminate jobs, even departments, and associated businesses.

Indeed, over the following months, Covid did just that. A public health crisis spawned an economic crisis. Within higher education, this was especially true for international education and study abroad. Six months later, Michelle Tolan Tomasi, former associate director for strategic engagement at the Institute for Study Abroad (IFSA), said, “The education abroad field has been decimated. It’s an unrecognized casualty of the pandemic.” Professional membership organizations have called for economic relief. They have also called for better information, as in better Covid data.

Ultimately, educators, parents, and learners all want the same thing—educational travel opportunities from which students will benefit and safely return. On the other side of Covid, PSA hopes that new partnerships will emerge, with the goal of better health and safety information. Evidence-based knowledge will serve students and also guide the programs that teach them.

Knowing what you know now…

Vicky’s question still echoes in my head, though over time, I’ve gradually understood what stunned me. It was the qualifier, knowing what you know now. The very idea triggered enormous waves of guilt and anxiety. As parents, above all else, we are primed to safeguard our children.

Catastrophic experience, as child loss is, carries complex feelings and ideas. While sudden death may be received as fact, it is only over time that profound bereavement reveals itself as having two features, scope and duration. The scope of change is massive. And the duration of that massive change will exist for the rest of one’s life. However, comprehending this takes time. One word joins two, then a phrase, until profoundly true sentiments emerge.

The deepest part of me still struggles with should-haves. Inside me, the fact of Thomas’ death lives like wildfire. Illogical as it may seem, I carry what happened to him as my failure. I was Thomas’s mother; I should have protected him. If I could turn back time, of course, I would. And I would tell my child, “No. I love you so much. You cannot leave me, or us, or any of the precious world we have built together.”

But bending time is not an option. My only choice is forward. To carry the dead, tell their stories, and mobilize for change; this is why PSA was created. This is why Ros and I go on.